The Tripods are coming!

I thought I'd continue my exploration into all things Martian by sharing some of the books I've come to associate with The War of The Worlds. These are novels mainly that I feel continue or give a contrasting take on the themes of that fantastic tale somehow.

First up is the Tripods trilogy by John Christopher - a favourite author of mine, especially for his Sword of the Spirits trilogy. 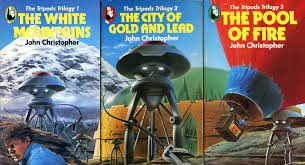 Its a while since I've read the three books and I'm holding off rereading them until I track down a replacement copy of the The Pool of Fire, which has mysteriously vanished from my book cases. Apparently there was a prequel written, When the Tripods came, which I wasn't aware of.

If you're not familiar with the premise of the trilogy, here's a brief summary -  it is set in a world conquered by the Masters and their Tripods. Human society has reverted to a medieval, agricultural level with little industry, other than that closely controlled by the aliens. Humans are controlled by the masters by being "capped" at the age of 14 - once their brain cases have stopped growing. The cap facilitates some kind of mind control where creativity and curiosity are suppressed, rendering humans docile and willing to serve the tripods.


The White Mountains kicks off the trilogy with the story of Will, his cousin Henry and French teenager Jean Paul, nicknamed Beanpole. Will is 13 and due to be capped, although a meeting with the strange vagrant (Humans who's minds have been damaged by the capping process), Ozymandias precipitates a journey to find and join the Human Resistance hiding in the titular White Mountains.

The City of Gold and Lead sees Will, Beanpole and new friend, Fritz sent on a dangerous mission to infiltrate a Tripod city to learn what they can of the alien Masters. The aliens select new slaves to serve them through a sporting contest - the artificial gravity and toxic atmosphere inside their pressurised cities means that Humans don't last long in their service and so strong new candidates are often needed. A plan to terraform the Earth so its atmosphere is more like that of the Masters' home planet is discovered by Will and he must escape to get the news to the Resistance in the White Mountains. 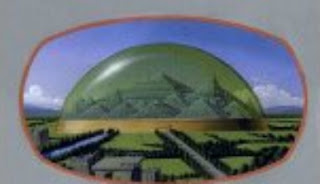 The Pool of Fire sees the Resistance going on the offensive. Will and Fritz are sent out to the Eastern Europe, the Caucasus, and Middle East t start up new resistance cells amongst the uncapped young. The Resistance knows that alcohol has a strong soporific effect on the Masters having ambushed a Tripod. A coordinated attack using this knowledge is launched against the Tripod cities. The saga ends with the Tripod yoke being lifted from Humanity, but old nationalist tensions begin arising in the newly freed word and a peaceful future is left hanging in the balance as war between nations looms large on the horizon. 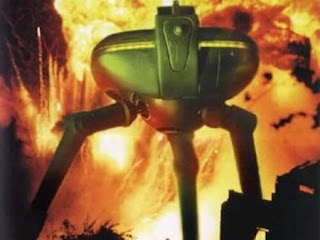 Comparisons with Wells' Martians are obvious but here is what John Christopher (real name Sam Ayoud)  has said about the inspiration behind his tripods,

It may be hard to believe this, but I’d forgotten Wells’ Tripods until after the book was taken. I then set out consciously to adopt a more logical approach. Wells’ Tripods had been used by ‘spider-like creatures’. I wondered (then – and like anyone who’s tried to make them work on film) how they actually progressed … and for that matter, why. If Wells’ Martians had been copying a body-image they would have used eight-legged crawlers (which would have also been more efficient). From the Tripods I developed the Masters and their triangulated city. I also thought of the stilt-men of the French marshes, and gave them a marshy steamy planet as their point of origin.

Not sure where the spider reference comes from, but its clear that for all the similarities, Christopher's Alien Masters are very different to the Wellsian Martians.

Lots of great ideas for scenarios to pinch for All Quiet... from this exciting trilogy though. Firstly we get a great view of the  pressurised domes and pyramidal buildings that make up the Tripod cities - could the Founder Tripods be building something similar in Martian occupied America? A desperate, all or nothing assault by the US on a newly founded and discovered city could be fun - their objective to wreak as much havoc on the city while the Martians attempt to minimise the destruction. 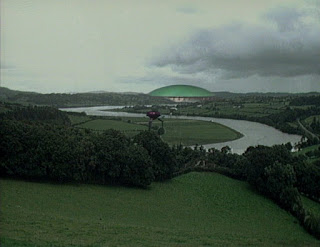 I also like the idea of the Resistance - how long can the free nations hold out before they break down in the face of Martian aggression. What will come after Governments topple - how will Humanity continue the figt against their alien oppressors? Are their pockets of resistance in Martian held territory that need relieving - could they even be the base for desperate missions behind enemy lines?

We already have Slaver Tripods in All Quite... along with their Zombie troopers controlled by the helmet like devices attached to their heads. Might the Martian scientists be close to perfecting a way of transmitting a mind control wave? Another desperate mission to destroy the prototype Mind Control Array should ensure a tense game - especially with a turn limit before it is switched on...

Right then, off to ebay to find copies of The Pool of Fire and When the Tripods Came, as well as the DVD of the BBC series!
Posted by Thantsants at 04:22